Most US coins have their face value listed in cents on the back of the coin. But the quarter is listed in dollars, so it says Quarter Dollar, which is equivalent to 25 cents. And back in 1957, the bigger circulating coins were still made of silver. So let’s assess the 1957 Quarter Value.

History of the 1957 Quarter

If you look at a Quarter today, it has a right-facing profile designed by Laura Gardin Fraser. And this may seem like a new design since it was first placed on the Quarter in 2022. But if you know anything about coins, you’ll know this same portrait was used on a 1999 gold bullion coin with a $5 face value. If you know even more, you’re aware it’s a 1931 sculpture!

Don’t worry, we’ll explain. First off, Laura Gardin Fraser was the wife and former student of James Earle Fraser, the artist who designed the Buffalo Nickel. But Ms. Fraser has her own bona fides and won multiple coin competitions in her time. She also made monuments and medals of reknown. For context, this coin portrait won a Washington Design contest in 1931.

But at the time, the Treasury Secretary, Andrew W. Mellon, preferred a profile done by John Flanagan, so that’s what ended up on the Washington Quarter from 1932 to 1998. The profile was slightly modified by William Cousins, then re-used from 1999 to 2021. But let’s go back to the start. In 1932, with Washington’s Bicentennial coming up, folk wanted him on a coin.

Washington himself wasn’t a fan of this concept. He felt that putting leaders on currency was too colonial and went against American Democracy. But long after his death, he was put on the $1 bill in 1869. And by 1932, mint officials had agreed to put him on the 25c coin for a year. That ended up continuing to date because Washington Quarters were so popular!

One of the reasons this coin did so well is that the public and the mint both loved it. For reference, the mint prefers flatter, low-profile coins because their dies last longer, so it costs the mint less money to maintain and/or replace their equipment. This enhances seignorage, a large part of mint revenue. Seignorage is the difference between coin cost and face value.

In the early days of coining, relief levels were less of an issue because coins were designed by in-house mint engravers, so they could specify the appearance and style of coins. But starting 1904, then President Theodore Roosevelt demanded that US coins should be prettier and more artistic. He invited external artists to ensure this happened, upsetting staff at the mint.

The result was coins that were nice to look at but had high relief, required additional strikes to coin clearly, wore out the dies faster, and therefore cost the mint more money. And there were personal clashes between the internal and external artists too! So lots of beautiful coins were redesigned as soon as their 25-year tenure officially expired, including Buffalo Nickels.

But Washington Quarters were pretty enough for the public and practical enough for the mint. Washington’s face was recognizably rendered, but was well-balanced and sufficiently spread without unnecessary points of high relief. So while the tails side was tweaked over the years, and changed completely to commemorate key events, the heads side stayed intact.

Features of the 1957 Quarter

When you’re describing a coin, it can be useful to know the technical terms, so let’s list the most important ones. The coin blank is called a planchet, the heads side of a coin is called the obverse, the tails side is called the reverse, and the thin side that you flip is called the edge.

Edges can have reeds or they can be smooth/plain. Any images engraved or etched onto a coin are called devices, while the background is called the field. Coins can have words too, and they’re called mottos or legends. They also have the designer’s initials and a mint mark.

The Obverse of the 1957 Quarter

The obverse (heads said) of the 1957 Quarter has a portrait of George Washington. It only goes up to his neck, with the designer’s initials, JF, on the neckline cut-off. At the top of the coin is the legend Liberty, while the motto In God We Trust is on the left. The mint date is on the lower rim of the coin, below his neck. The mint mark positioning depends on the year.

The Reverse of the 1957 Quarter 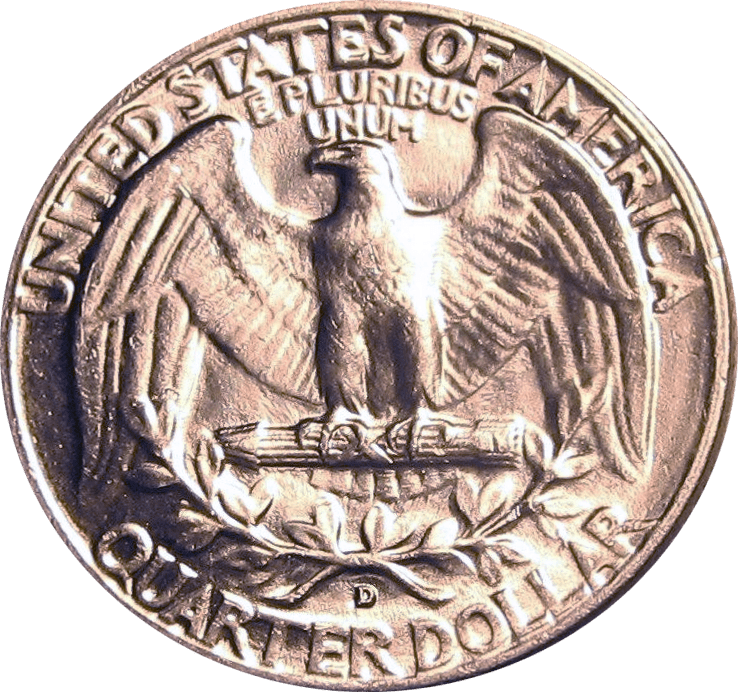 The reverse (tails side) of the 1957 Quarter has a bald eagle as its device. It stands with its wings held out and carries 13 arrows in its talons, one for each of the 13 original US states. It has two olive branches under its wings, with the mint mark below them. The top of the coin has United States of America and E Pluribus Unum, while the bottom reads Quarter Dollar.

Other Features of the 1957 Quarter

In 1957, the Washington Quarter was made of 90% Silver and 10% copper. It measured 24.3mm in diameter, had reeds along its edges, and weighed 6.25g. The mass and weight of this coin were deliberately calibrated to have ¼ of the weight, mass, and silver value of the silver dollar, even though the $1 coin itself was rarely seen or used in circulation.

Typically, coins have three value levels – the face value that’s printed on the coin, the melt value of the metal that makes the coin, and the perceived commercial or social value in the secondary market. The latter is defined by the coin’s condition, its rarity, and its mint mark.

As we’ll soon see, this is why proofs are often cheaper than high-grade circulated coins. After all, circulated or business strike coins get dinged and damaged in everyday use, so it’s rare to find one that’s shiny and pristine, and that adds resale value. But let’s start with mint marks. 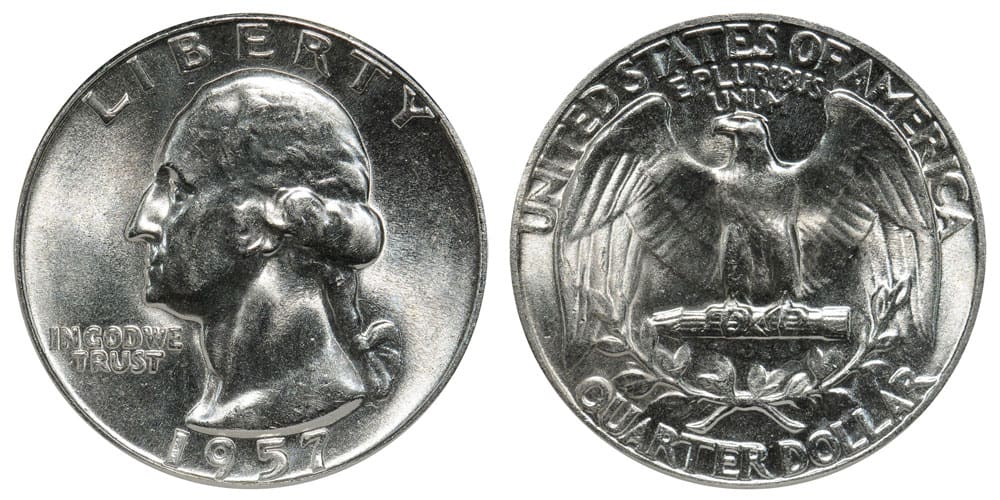 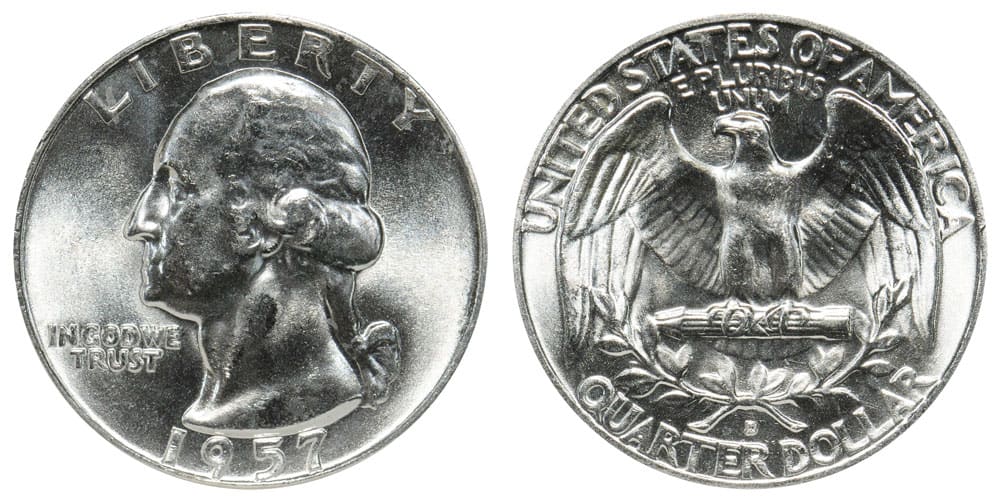 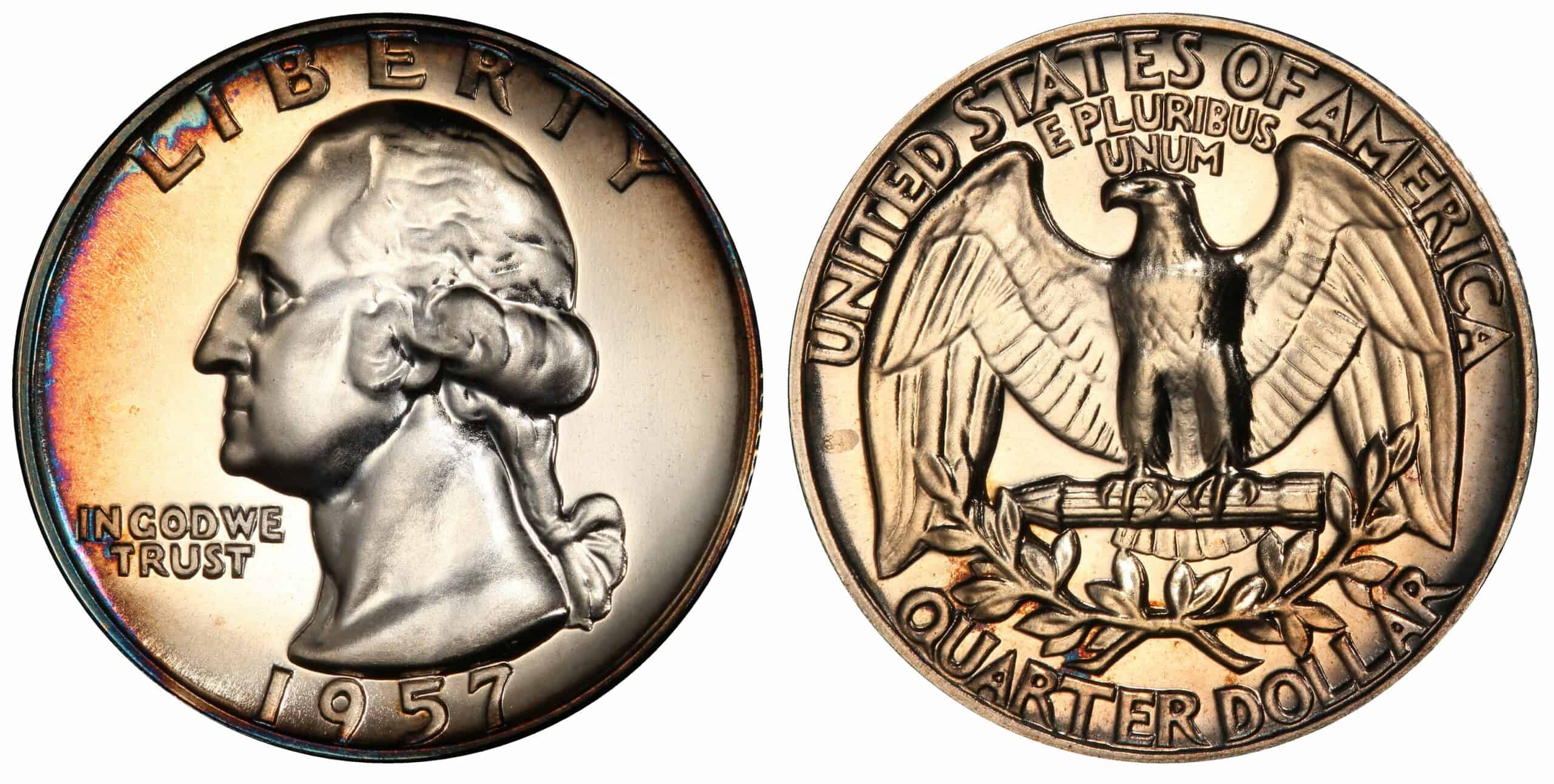 Proof coins seem really pricy because they’re so pretty and shiny. In reality, they’re often cheaper than circulated coins because they’re not rare, and most are kept in high grades. Think of it this way – collectors buy these coins for investment, so they never remove the coins from their protective cases, and they won’t resell the coin unless they’re forced to.

When they eventually choose to resell, every other available coin is in the same condition, and that keeps prices low. But let’s take a step back and talk about what exactly a proof coin is. It’s made in a special way, on a planchet that’s tumbled in a vat full of stainless steel balls, then rinsed using a special cleansing fluid. That’s how the coin gets its mirror-like shine.

The coin is then struck several times using a special proof die. The die field is polished with a horse hair brush to make it reflective, and the device is frosted by either pickling it in acid (before 1970) or engraving it with a computerized laser (after 1971). For acid wash coins, the first 50 to 100 have the strongest contrast between the frosted field and the reflective device.

These coins are graded Deep Cameo or DCAM by PCGS, and Ultra Cameo by NGC. After the chemical frosting starts to fade, the contrast is less drastic, so lower coins are graded Cameo. But on the newer laser-frosted coins, all proofs have the same DCAM or U-CAM quality. And 1957, the Philadelphia Mint made 1,247,952 acid-frosted Proof Quarters without mint marks.

The fourth factor in any coin’s value is its errors. But first, let’s look at how coins are made. The artist sketches a design, and once it’s approved, s/he makes a large prototype out of rubber, plaster, and epoxy. This model is called a Galvano, and it goes into the mint reducing machine to be shrunk into a metal template, which is then used to make a steel master hub.

This hub makes a master die, which makes a working hub, which makes multiple working dies. The mint mark is added, and finally, the working dies strike planchets to make coins. Every stage involves several strikes, and if the target moves at all between strikes, you can get doubling or tripling errors that are worth good money. Let’s review a few common mistakes.

The mint mark is usually the last symbol added to a working die. And until 1989, these mint marks were placed using a hand-puncheon after the die had exited the hub press. So you can have RPMs (re-punched mint marks) on dies without doubling errors. Here, the misplaced mint mark (MPM) was struck in the wrong spot! It’s worth $45 in AU 53 and $95 in MS 63. 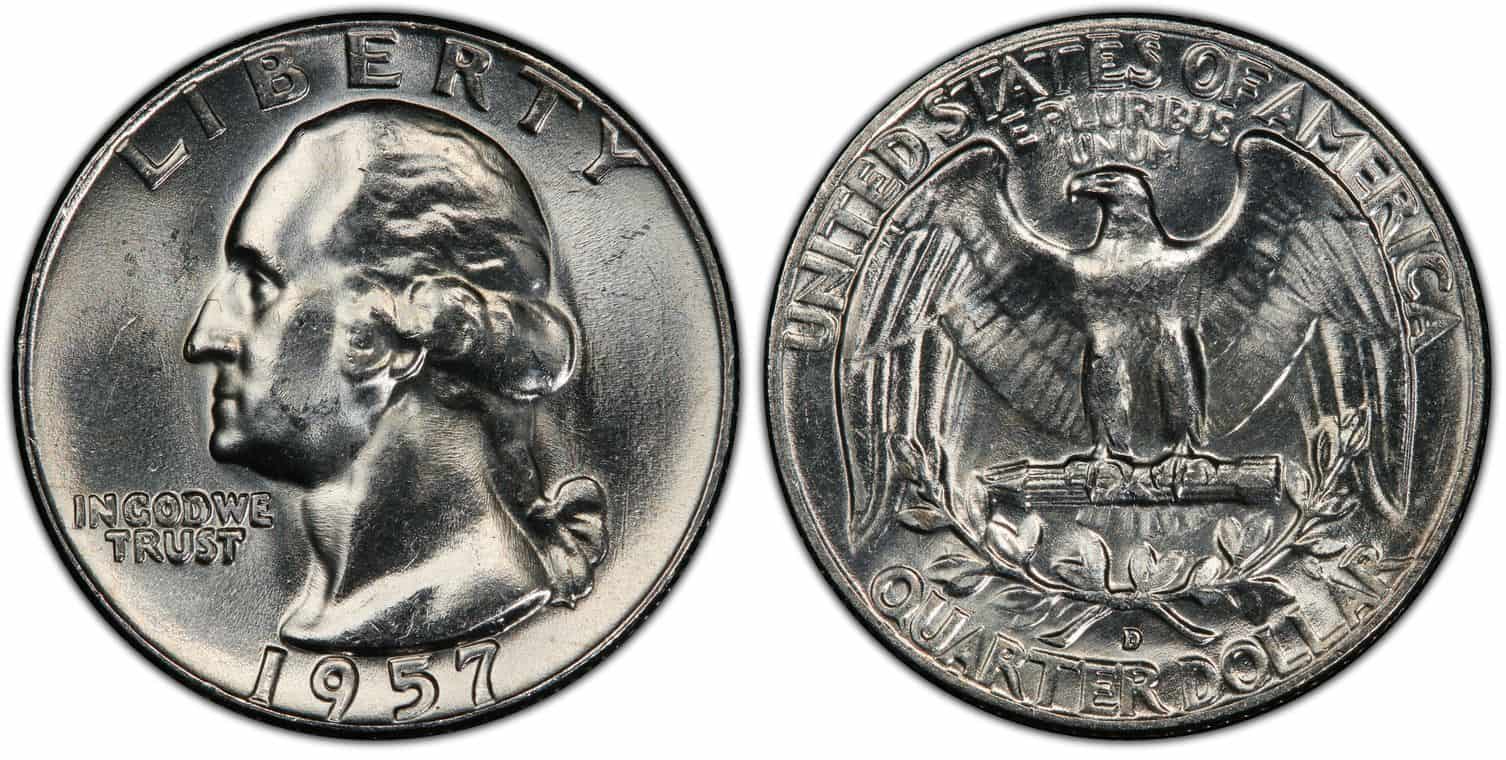 Doubling or tripling errors are mostly defined as DDO (doubled-die error obverse), TDR (tripled-die reverse), etc. And they’re clearest on the letters and numbers. But sometimes, on older dies, a mint worker might re-polish or re-engrave certain sections to enhance clarity and extend die life. This re-engraved tail feather error is worth about $600 in AU grades.

DDR means doubled-die reverse, and it happens at the hubbing stage when the reverse die shifts slightly between strikes so that the next impression lands on a slightly different spot. As we said, these doubling errors are most visible on the letters and numbers, though you may need a coin microscope or jeweler’s loupe to catch them. In MS 64, it’s only worth $18.

Modern coins are carefully minted to ensure they’re the same size, mass, and dimension. The collar helps because it maintains the weight and thickness of a coin, and the mint uses a three-piece collar mold to make them. If any of the pieces detach too soon, that side of the coin may be thinner and look misshapen. This partial collar error is worth $25 in AU 55.

FAQs About the 1957 Quarter

Yes. All Quarters minted before 1965 were 90% Silver and 10% Copper. That didn’t change until 1965 when most circulating coins were switched to the Johnson Sandwich of 91.67% copper and 8.33% nickel. This change was necessitated by the rising spot price of silver.