1940 isn’t a key date for quarters, but as a coin that’s nearing its 100th anniversary, it’s worth keeping an eye on its values. It happens to be one of the coins whose rates are steadily rising, and with Washington’s 300th birthday coming up in 2032, you should probably hold on to any pieces you might still have! So let’s start you off by confirming the 1940 Quarter Value.

History of the 1940 Quarter

George Washington was a military leader, a Founding Father, and the 1st President of the United States. But unlike many prominent figures, he didn’t want to be put on American money. He felt the practice of planting government officials on coins was old-fashioned, imperial, and colonial. That said, he did allegedly donate his silver spoons to the US mint.

Apart from Washington himself, the Quarter has been used to celebrate our 50 states and 6 territories, important women in our history, and some of our most beautiful national parks. It has also played a significant role in uplifting minorities and marginalized communities. It’s this coin that featured the first Black, Latinx, LGBT, and Asian American representatives.

Washington was initially meant to grace the Half Dollar, and they only planned to use his face for one year. But they placed him on the Quarter instead, and the coin was so popular that it was never phased out, pun intended. The reverse (tails side) of this coin has changed tons of times over the years, and it continues to do so, but the obverse (heads side) remains.

The Life Mask of George Washington

The reason the coin was only meant to last a year was more practical than anything else. Herbert Hoover, the 31st US President, and a former Secretary of Commerce felt that these commemorative coins were wasteful and that they encouraged counterfeiting. He went so far as to veto the bill, so the GWBC offered to assuage him by only minting it for one year.

Like most sculptures of George Washington, the Quarter was based on the work of Jean-Antoine Houdon. He made a life mask by putting Washington on a table, greasing his face, and topping it with plaster. Houdon placed quills in Washington’s nostrils to let him breathe. Washington lay so still that his 6-year-old adopted grandkid, Nelly, thought he was dead!

Nelly – whose full name was Eleanor Parke Custis – got quite upset until they showed her the quills. For reference, she was the granddaughter of Martha Washington. Her dad was Daniel Parke Custis, Martha’s son by her late husband, John Parke Custis. This story gets told a lot because it explains why the sculpture of Washington was so detailed and life-like.

To avoid the hoarding and counterfeiting that Hoover was worried about, the US Mint repeatedly stated that this wasn’t a commemorative coin. It was intended for everyday use, although it would only be coined for one year. And unlike earlier, more ‘artistic’ coins, it had no spots of high relief so its details were sharp, clear, and well-balanced on the coin surface.

Features of the 1940 Quarter

To describe the features of a coin, you need some basic jargon, so let’s learn the lingo. The images on a coin are called devices, the words are called mottos or legends, and the backdrop is the field. The front or heads side is the obverse, and the back or tails side is the reverse.

The thinnest sides are called edges, and they can be smooth/plain or reeded. The raised rims that help the coin retain its shape are called collars, and they’re formed using a three-piece collar mold. The blanks that form the coin are called planchets, punched from metal sheets.

The Obverse of the 1940 Quarter 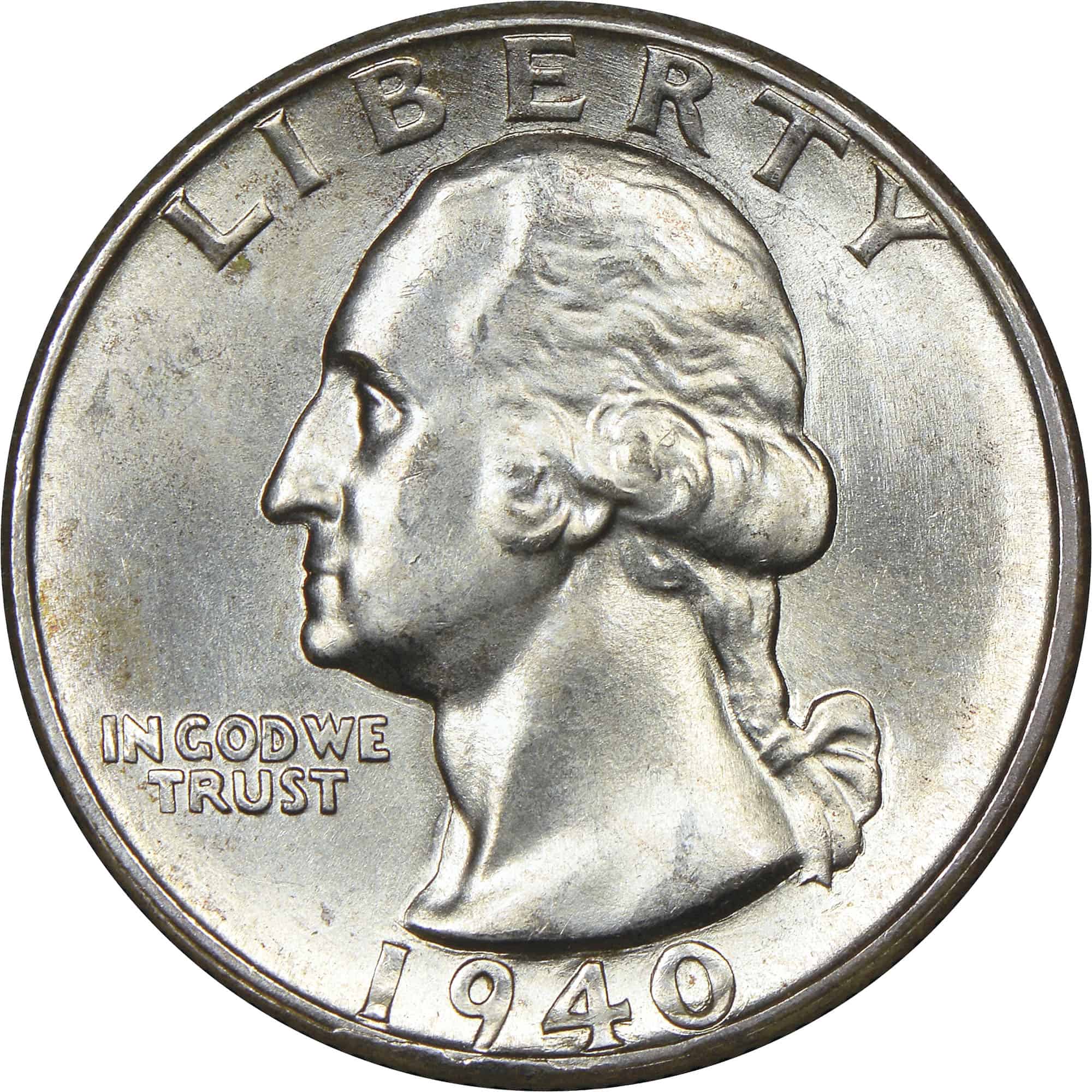 The obverse (heads side) of the 1940 Quarter has a portrait of George Washington facing left. It was designed by John Flanagan, so his initials, JF, are at the neckline cut-off. The legend Liberty runs along the top of the coin, above his head. In God We Trust is on the right of the coin, underneath his chin, near his Adam’s apple. The date runs along the bottom of the coin.

The Reverse of the 1940 Quarter 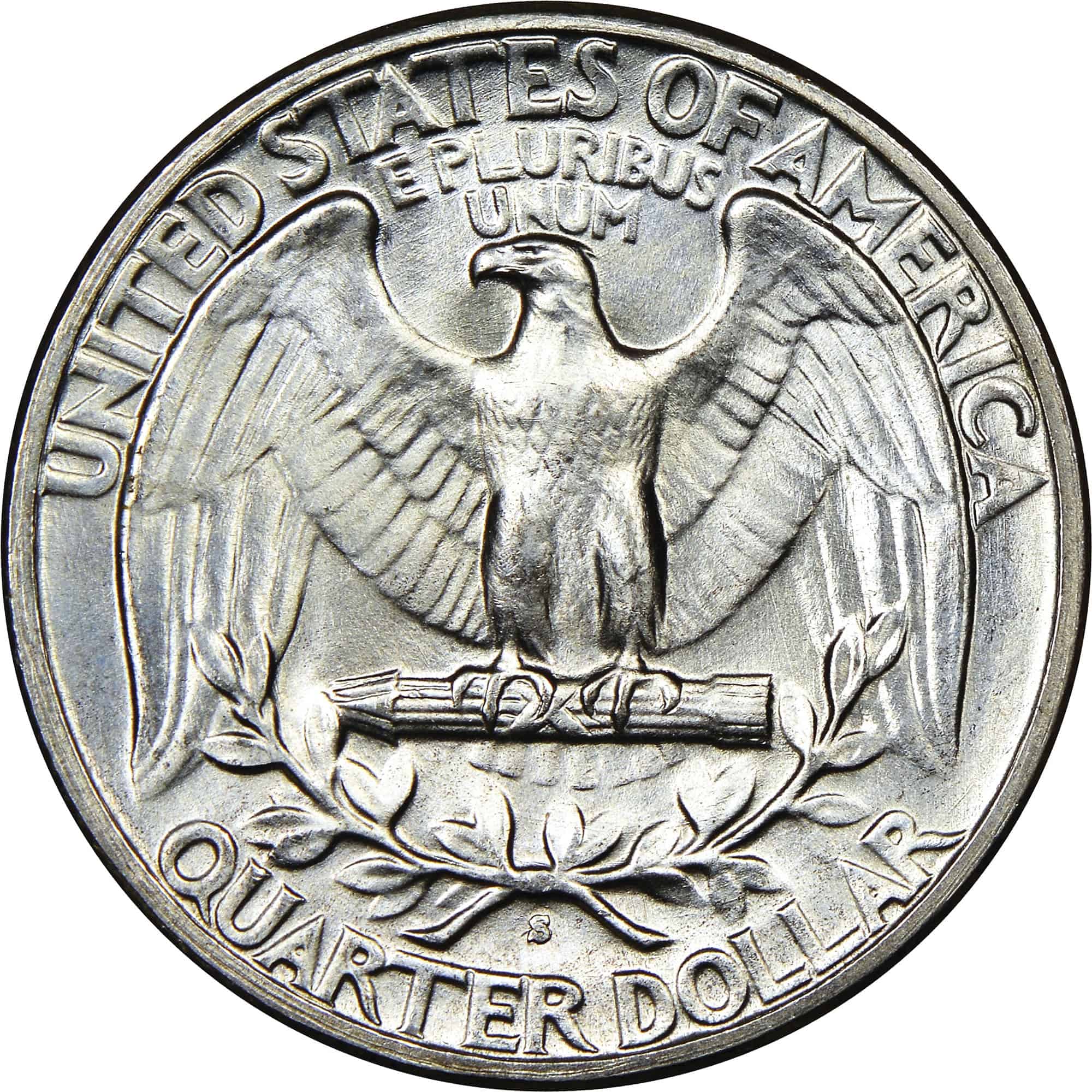 The reverse (tails side) of the 1940 Quarter bears an eagle with its wings outstretched. It has 13 arrows in its talons, representing the original 13 States of the Union. Two olive branches are linked under the eagle’s feet, and the mint mark is below the spot where they connect.

At the top of the coin, almost grazing the eagle’s wings, is the legend United States of America. Below that, seemingly squishing the eagle’s head, is the motto E Pluribus Unum. The denomination, Quarter Dollar, runs along the lower rim of this closely-cropped coin.

Other Features of the 1940 Quarter

In 1940, the Quarter was 90% silver and 10% copper. It was 24.3mm in diameter and weighed 6.25g. The coin has a reeded edge. The John Flanagan obverse was selected by Andrew W. Mellon, the Secretary of the Treasury. But it was an unusual decision because he didn’t win the Washington Redesign contest. The official winner was Laura Gardin Fraser…

First, the planchets are tumbled in a drum full of stainless steel balls. This makes them super shiny. They’re then rinsed before they go into the coin press, where they’re struck with proof dies. Dies are pickled in acid to roughen their surface. This makes the device looks frosted.

The field of the die is also polished using horse hair brushes. This gives the coins a mirrored field and a frosted device. Until 1970, the mint would look through the business strike dies and select the sharpest ones for polishing and pickling. They’d use these to press proof coins.

This meant the earliest coins 50 to 100 would have better contrast between the field and the device. These were graded Deep Cameo (DCAM) by PCGS or Ultra Cameo by NGC. The next grade would be Cameo, for strong contrast, while the rest would just be proof coins.

But from 1971, this whole system was computerized, so lasers created the frosted surfaces instead of acid. This way, all proof coins achieved uniform levels of contrast. On the other hand, some business strike coins were still shiny, though the planchets weren’t pre-polished.

NGC grades these shiny non-proof coins as PL for proof-like or DPL for deep-proof-like. In comparison, it grades pre-polished proof coins as PF while PCGS grades them as PR. That’s all about coin condition – now we’ll look at the 1940 Quarter Value based on minting locations. 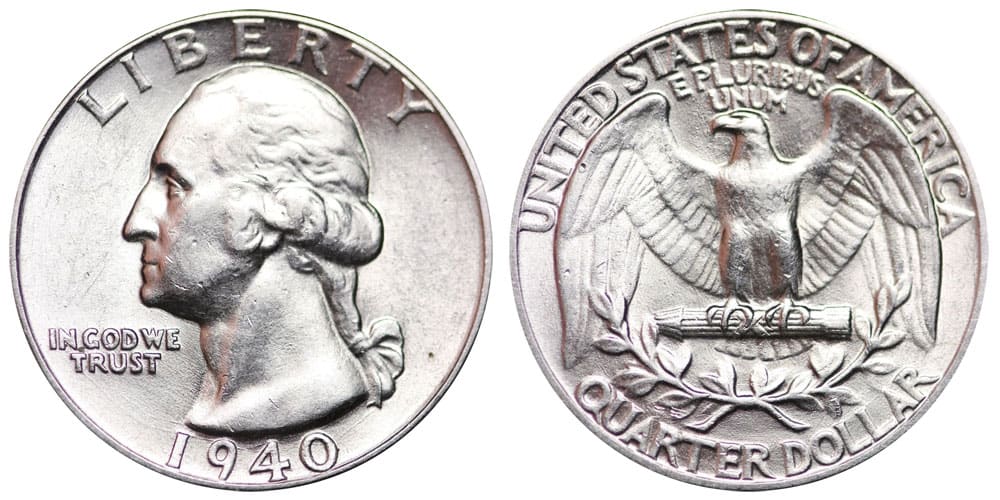 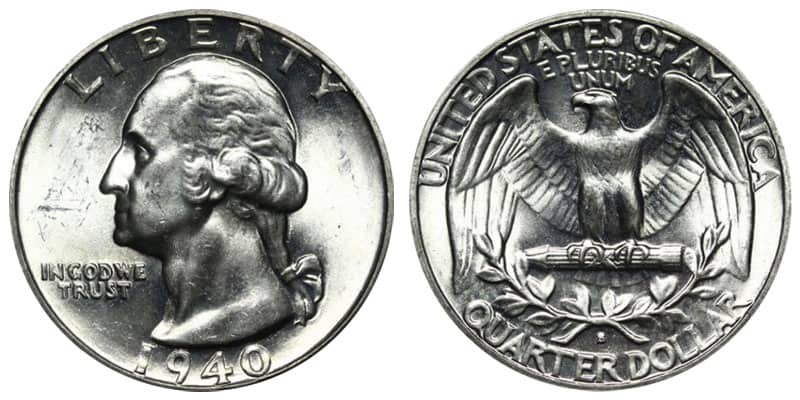 In the years when the mint didn’t produce proof coins, they’d either make Special Mint Sets (SMS) or Uncirculated Mint Sets. All these coins were as shiny as proofs, but they’re made in different ways. SMS coins are stuck on normal planchets that aren’t pre-polished like proofs.

But they still use polished fields, and the frosted effect can either come from acid pickling (pre-1970) or computerized lasers (post-1971). SMS coins are only struck once but at higher pressure. As for Uncirculated Sets, they get a satin finish instead of a mirrored field finish.

Here’s a spot of trivia for you. From 1937 to 1964, the die used for proof coins and business strikes had a slight variation. Circulating coins had very little space between the E and S in United States while on proof coins, the E and S were sufficiently spaced. 1940 is one of these.

As we’ve seen so far, the 1940 Quarter Value does seem to be rising, especially in high grades. But error coins can be worth even more than flawless ones, depending on the error. The most common ones are doubling or tripling errors at various stages. Think of a coin press like a rubber stamp, except it’s made of steel and stamped in three phases – hub, die, and planchet.

A prototype is reduced to make the master hub, which makes a master die, then a working hub, then working dies, which eventually strike planchets to make coins. And if the target metal shifts, strays, or wobbles at any step, the next strike will hit slightly out of place. This causes mint mistakes like DDOs, TDRs, RPMs, etc. Let’s look at some of the common ones. 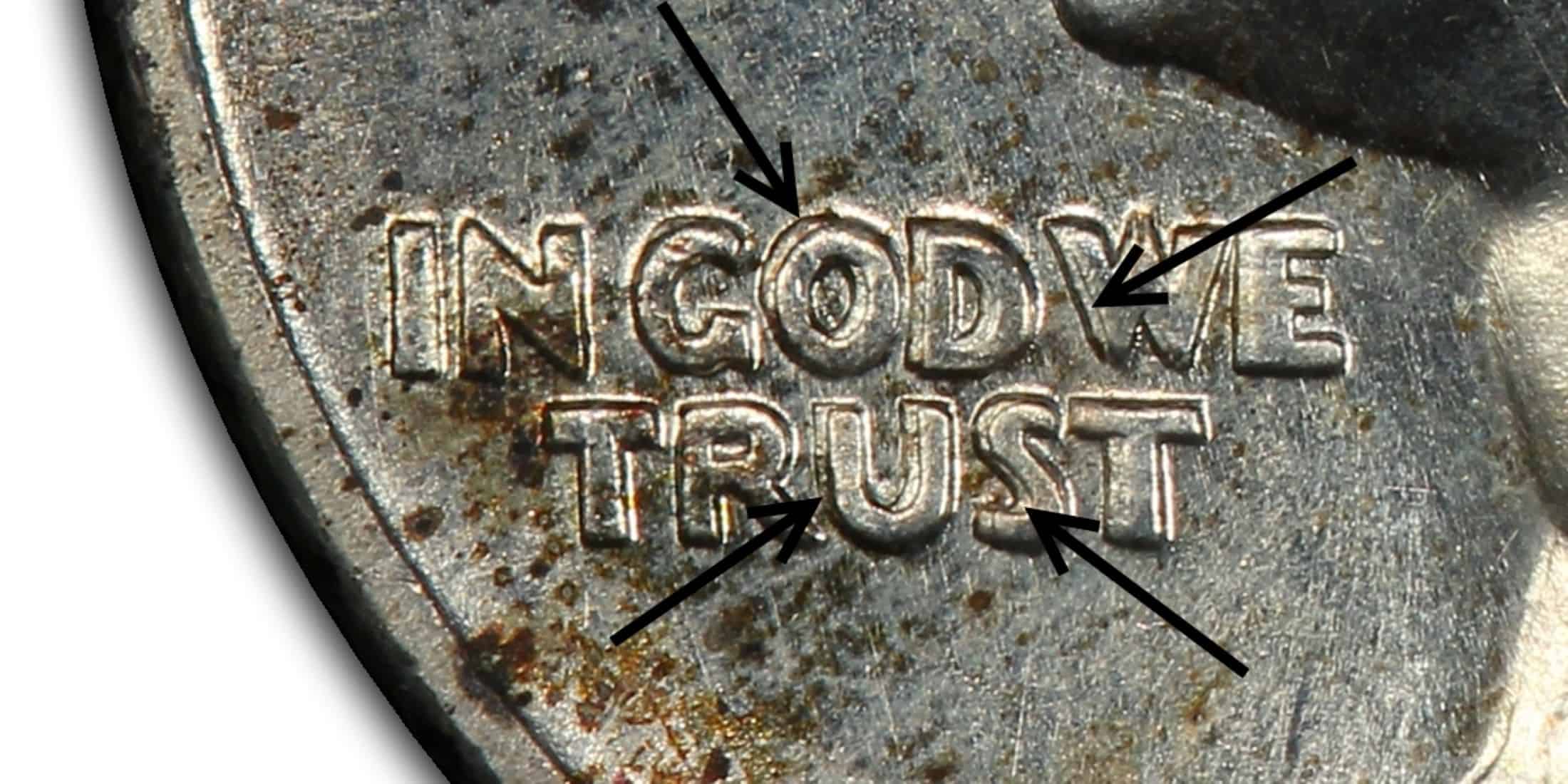 DDO means doubled-die error. It happens while the die is being formed by the hub, which takes multiple strikes. If the die changes its position, the next strike may land at a different spot and cause doubling or tripling on every coin minted with that die. These mistakes are clearest on the motto In God We Trust. They’re worth $200 in MS 63 and $800 in MS 65.

RPM means re-punched mint mark. It’s a doubling or tripling error that happens when the hand-punch shifts as it’s placing the second or third mint mark. And it’s written as D/D or S/S, which means D over D or S over S. In this example, the earlier D is quite far from the first one and is fairly faded. It’s worth $125 in AU 55, $200 in MS 63, and $400 in MS 65.

FAQs About the 1940 Quarter

Are Quarters from 1940 Worth Anything?