According to mint records, most of the 1962 Half Dollars were hoarded and melted because silver prices were so high. Those were the early days of the 1960s National Coin Shortage, and it gives these coins some premium since so few of them exist in high grades. Let’s take a closer look at the history behind this famous coin as we assess the 1962 Half Dollar value.

History of the 1962 Half Dollar

Benjamin Franklin, like George Washington, never wanted to be on US money. He preferred to put a proverb and a democratic symbol. But he was extremely popular and played a big role in building up the US Economy, so he currently sits on the $100 bill, the 2006 Founding Fathers $1 coin, and the 1948 to 1963 Half Dollar (where he was eventually replaced by JFK).

The idea of putting Franklin on a coin came from Mint Director Nellie Tayloe Ross, and it didn’t face any pushback. The only issue was the Commission on Fine Arts. They felt that the Liberty Bell should be displayed without its trademark crack, and the eagle should be bigger. They rejected the coin, but Ross and the Secretary of the Treasury made the coin, regardless.

Franklin was the 5th person to be placed on a coin after Abraham Lincoln’s Penny, Franklin Roosevelt’s Dime, George Washington’s Quarter, and Thomas Jefferson’s Nickel. And while Franklin was one of the Founding Fathers, he was the first American on a coin that hadn’t served as a US President. The portrait was based on a medal derived from an earlier artwork.

The medal itself was done by John Sinnock, and he developed it from a Benjamin Franklin bust sculpted by Jean-Antoine Houdon. Sinnock was the first mint engraver to redesign a circulating coin in over 40 years. And he worked on two consecutive coins – the FDR Dime and the Franklin Half Dollar. To understand the significance here, let’s look back a bit.

In the early days of minting, coins were designed by in-house mint engravers. But ever since President Theodore Roosevelt’s coin beautification project in 1904, external artists did these redesigns, typically through public contests. Sometimes, the mint accepted any and every entry. Other times, they invited pre-selected sculptors that had been vetted by coin experts.

When President Franklin Roosevelt died, they needed a quick commemorative coin and they wanted it in time for the March of the Dimes, a cause that was close to his heart. So it fell to the mint to provide a new coin design. For reference, Theodore Roosevelt (Teddy) was the 26th President while Franklin Roosevelt (FDR) was the 32nd President. It’s not the same guy.

And yes, they were related. Distant cousins. Anyway, FDR died in 1945 and the Roosevelt Dime popped up in 1946, designed by Chief Mint Engraver John Sinnock, though most of the work was done by his assistant, Gilroy Roberts. Two years later, the same pair worked on the Franklin Half Dollar, and the same issues cropped up, namely plagiarism and communism.

On both coins, Sinnock was accused of stealing artwork, first from Selma Burke for the FDR portrait on the Dime, then from John Frederick Lewis for the Liberty Bell on the Half Dollar. Also, Sinnock’s initials – JS on the Dime and JRS on the Half Dollar – were both rumored as communist nods to Joseph Stalin. The mint aggressively denied these communist claims.

While Sinnock was working on these two coins, he had serious health issues, which is why Gilroy Roberts covered the bulk of the task. He didn’t get formal credit and his initials are not on either coin, but he was promoted to Chief Engraver when Sinnock died in 1947, so there’s that. But his monogram on the JFK Half Dollar was later accused of communism too!

Speaking of monograms and designers’ insignia, Mint Engravers would typically hide subtle initials at the portrait cut-off, since they were civil servants who didn’t seek additional credit. But external sculptors needed the recognition to help them find new clients, so they often put more visible initials on the coin. It explains those infamous signature-related controversies.

Features of the 1962 Half Dollar

If you want to sound like you know what you’re doing when you talk about coins, it can be helpful to use the right terms, so let’s go over the most important ones. A planchet is the blank disc that forms a coin. The heads side is technically referred to as the obverse while the tails side is the reverse and the thin sides are the edges. The images or portraits are devices.

Words on the coin can be mottos or legends, and the backdrop of the coin is called the field. By US law, quarters, half dollars, and dollars must have an eagle on the back, and all coins must have E Pluribus Unum, United States of America, Liberty, and In God We Trust. Other elements include the mint mark and the designer’s initials, though these are not mandatory.

The Obverse of the 1962 Half Dollar 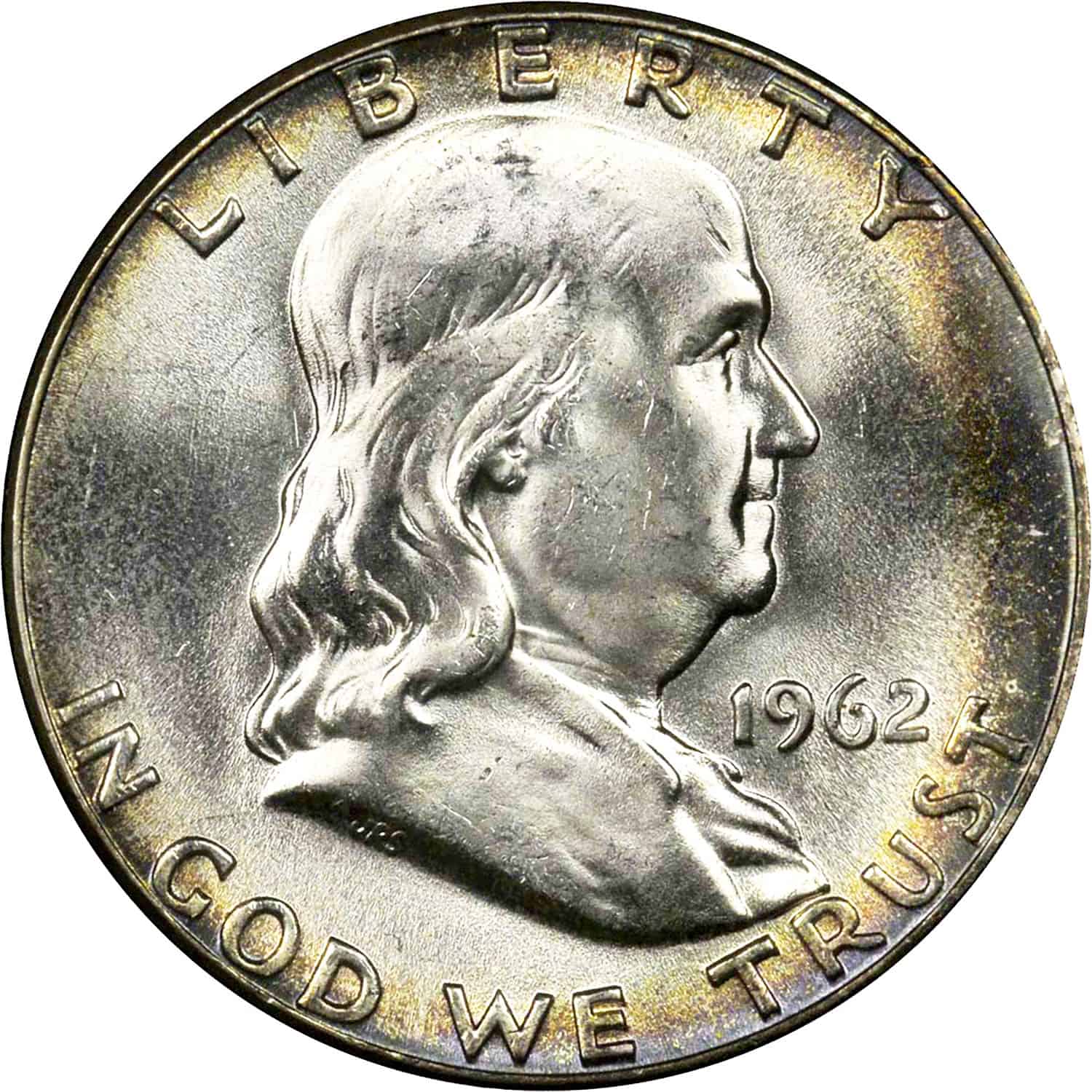 The obverse (heads side) of the 1962 Half Dollar has the right-facing profile of Benjamin Franklin facing right. The mint date is on the right, below his chin. In God We Trust is on the lower rim while Liberty runs along the upper rim, above his head. The designer’s initials, JRS for John Ray Sinnock, are towards the left of Franklin’s shoulder cut-off, above God.

The Reverse of the 1962 Half Dollar 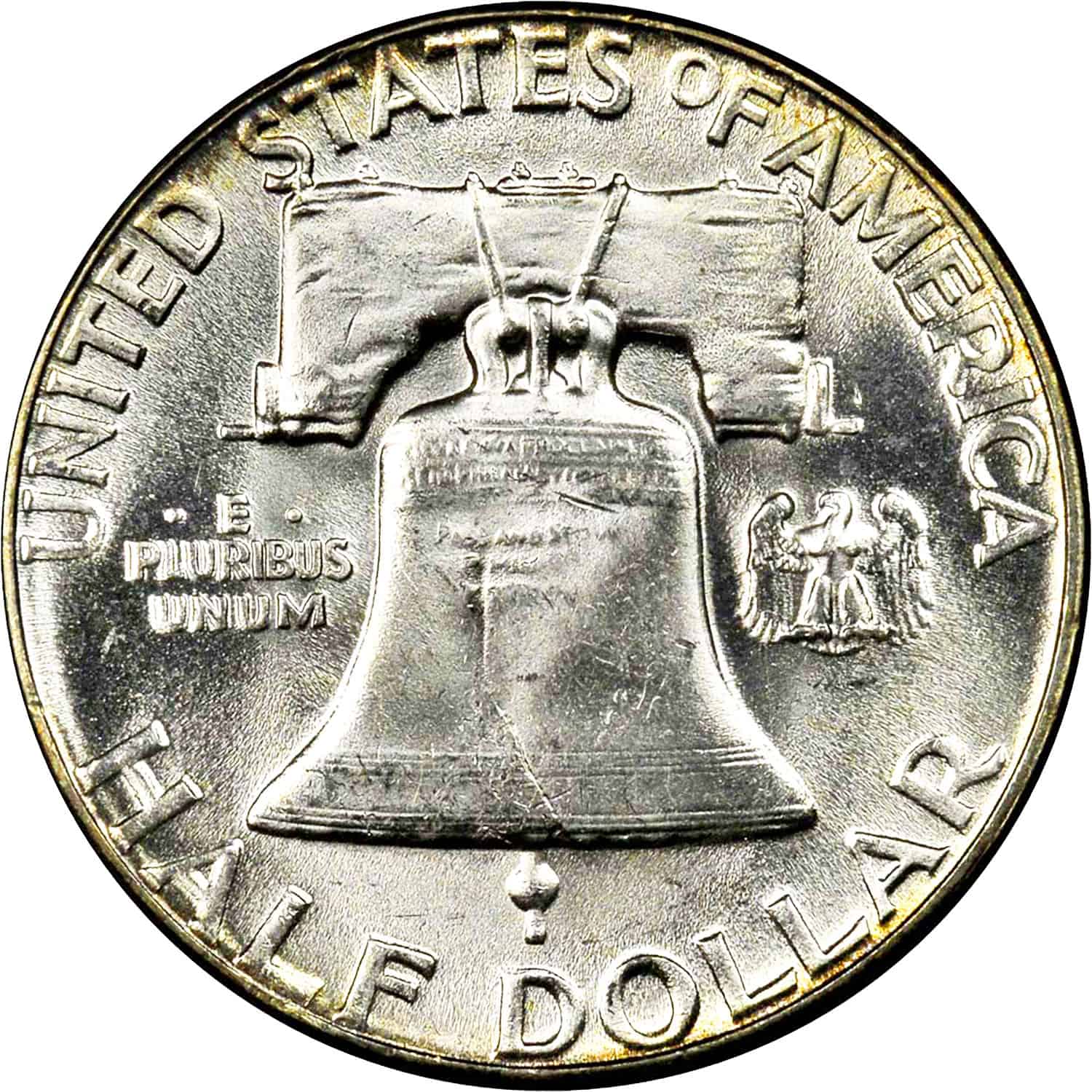 The reverse (tails side) of the 1962 Half Dollar shows the Liberty Bell with its crack distinctly visible. The mint mark is centrally positioned above the bell, and the upper coin rim bears the legend United States of America. The denomination curves along the lower rim of the coin, and E Pluribus Unum is tucked on the left side of the coin. The eagle poses on the right.

Other Features of the 1962 Half Dollar

The eagle on the coin is strangely proportioned, with its long humanoid legs and its cape-like wings. It was inserted at the last minute to comply with legal coinage requirements, so the designers probably didn’t give it much thought. As for the coin itself, it’s bulky and reeded at 12.5g. It measures 30.6mm across, is 1.8mm thick, and was 90% silver plus 10% copper.

Proof coins are also graded from 1 to 70, with PCGS grading them as PR while NGC grades them as PF. Other shiny non-proof coins might get a PL for Proof-Like or DPL for Deep-Proof-Like. As for Franklin Half Dollars, they have an extra grade called FBL or Full Bell Lines, meaning you can see and count all the parallel lines at the top and bottom of the bell.

In 1962, Half Dollars were only made in Philadelphia and Denver. The San Francisco Mint was closed in 1955 due to low demand and didn’t reopen until 1965 when it started producing coins without mint marks, then in 1968 it was officially re-launched to focus on proof coins. So let’s look at proven sales records and current price estimates from the two active mints. 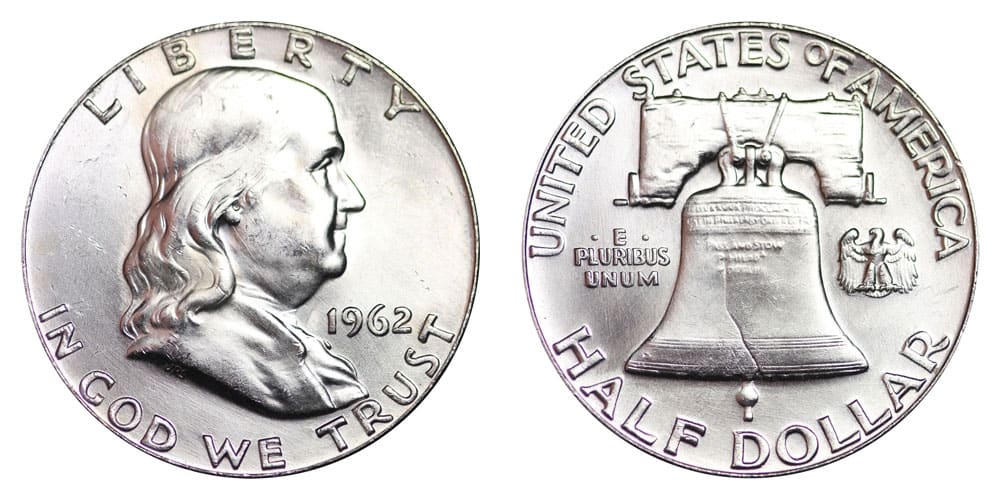 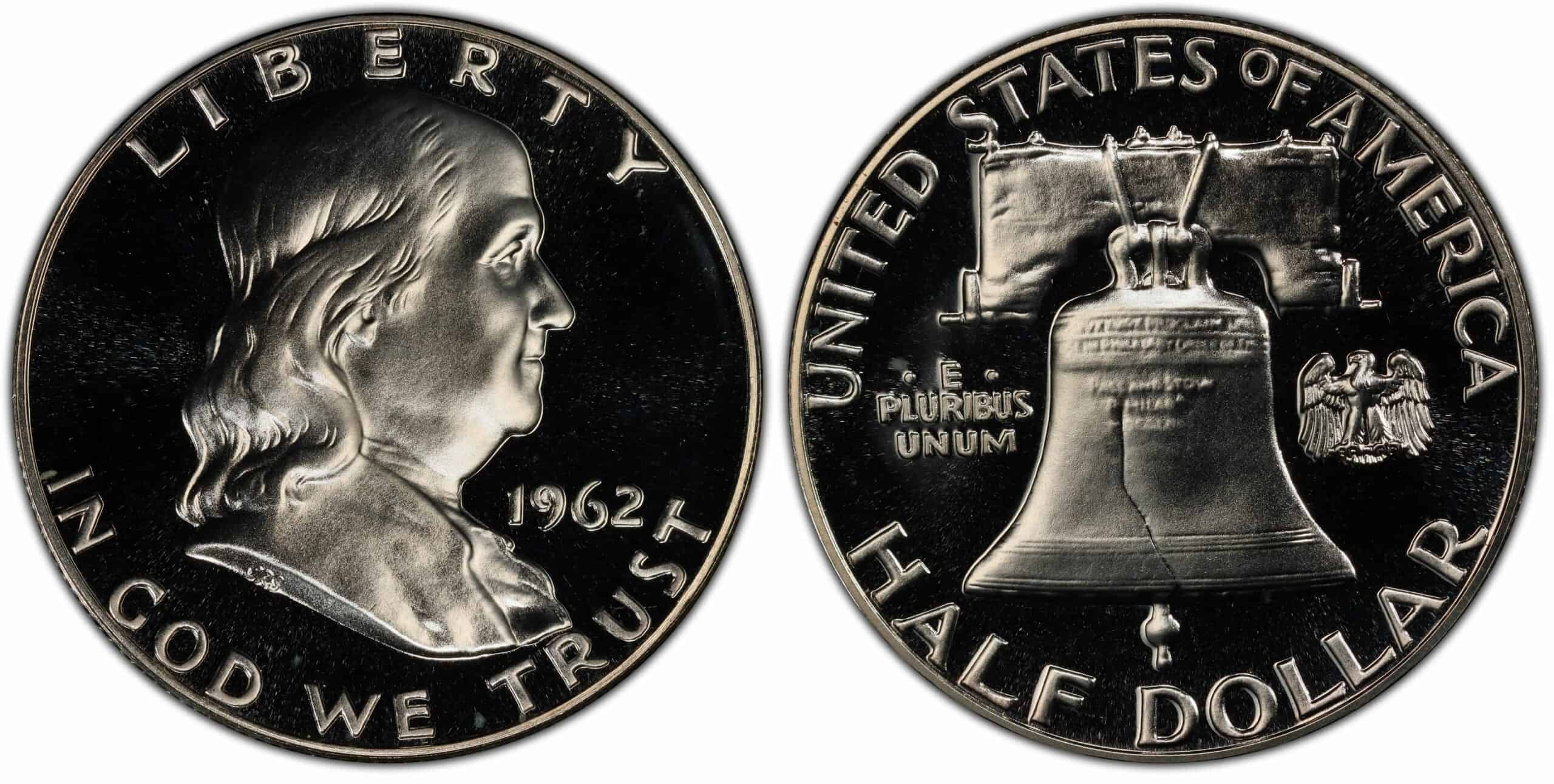 Coins need careful measures to help detect counterfeits, so the mint makes proofs to ensure the dies are accurate. A copy of these proofs is kept in the archives while some are sold to collectors for extra revenue. In years when the mint doesn’t make proofs, they might make Special Mint Sets (SMS). These two coin categories are made with special dies and planchets.

The main difference between SMS coins and Proof Coins is that proofs are pre-polished or burnished then struck several times while SMS coins aren’t pre-polished and are struck only once, but with higher pressure to ensure the details are clear. Also, all SMS coins go without mint marks while only Philadelphia proofs lack mint marks. So let’s talk about the process.

To give proof coins that trademark burnish, they’re tumbled in a vat full of stainless steel balls then rinsed. The shiny part of the die is polished too, but using horse hair brushes. For the frosted bits of the coin, the die is either pickled in acid or etched with a computerized laser. Before 1970, the acid-pickling meant proof coins had inconsistent levels of contrast.

The earliest coins in the batch had the deepest haze, which meant they had the strongest contrast between the device and the field. They were graded Deep Cameo by PCGS or Ultra Cameo by NGC. But as the frosting wore off, later batches were graded as Cameo or just regular proof. Laser frosting resolved this issue, allowing all modern proofs to be DCAMs.

Coin errors show up in different ways, and some can be worth a lot of money! The most common are doubling or tripling errors that happen at various minting stages. Typically, a master hub makes a master die, which makes working hubs, which make working dies. Mint marks are added to the working dies by hand before these working dies are used for coins.

Each of these stages – hub, die, and planchet – involves multiple strikes (except in SMS coins that are only struck once). And if the metal moves between strikes, you get errors like DDOs, RPMs, or off-centers. You can also find errors where the wrong planchet is used, a foreign object slips between the planchet and the coin press, or certain coin details get forgotten.

When a coin is being struck, the obverse and reverse die hit at the same time. If the coin feed delays, the dies will smash each other with nothing in between, transferring some of their designs onto each other. Then the next planchet might accidentally get a few reverse design elements on the obverse. An MS 65 was $739 in 2012 and an MS 64 FBL was $1,925 in 2020. 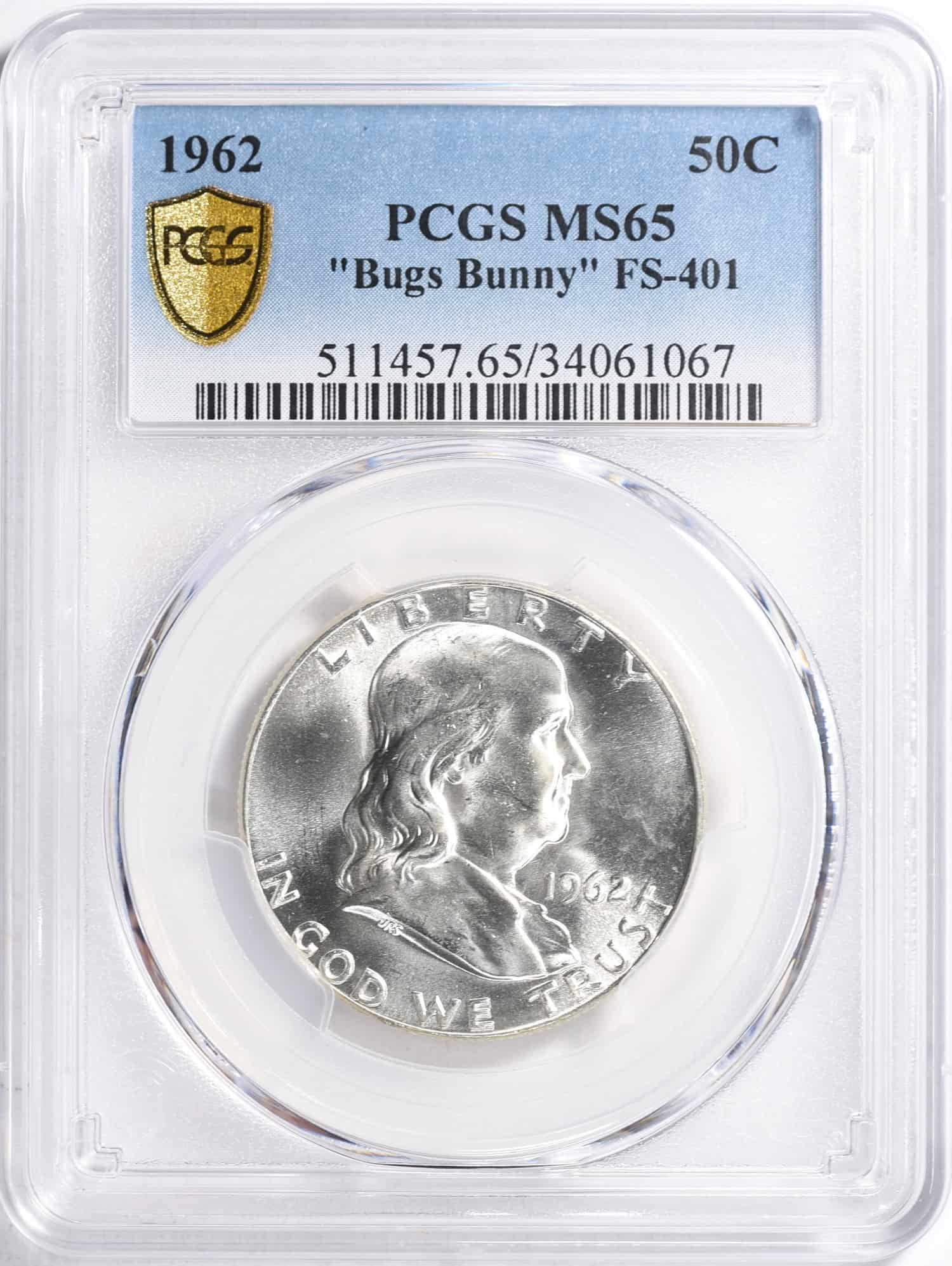 DDO means doubled-die obverse. It happens at the hub stage when the die moves between hub strikes, causing doubling on the obverse of the coin. The easiest place to spot doubling is in the words and numbers, so check the date, legends, and mottos. A PR 68 DDO sold for $312 in January 2022. PCGS has only graded two samples and estimates their value at $500.

FAQs About the 1962 Half Dollar