The Franklin Half Dollar was coined from 1948 to 1963. And yes, it’s the guy with the keys and the kite. When he wasn’t busy discovering electricity, this Founding Father helped us gain independence, write the constitution, and establish the United States. So while he never became president, he’s a crucial historical figure! So let’s discover the 1951 Half Dollar Value.

History of the 1951 Half Dollar

Plus, in the early days, he organized trade treaties and loans from Europe that helped us set up our democracy. This huge economic role is why we’re all about the Benjamins, even today! But let’s focus on the Half Dollar. It’s sometimes called The Half for short and has a face value of 50 cents. It started out as 90% Silver and 10% Copper until the mid-1960s.

At that time, the Coin Shortage made the mint take silver out of most circulating coins, but the Half Dollar still kept 40% of its silver until 1971, when it took on the Johnson Sandwich of 91.67% copper and 8.33% nickel. As we said earlier, Benjamin Franklin graced the coin from 1948 to 1963, when he was displaced by John F. Kennedy, the 35th US President.

JFK was placed on the coin within weeks of his assassination and is still on the Half Dollar today. And since $1 coins are rarely used in everyday transactions, the Half is physically the largest (and heaviest) circulating coin. But how did Ben Franklin end up on the coin? Well, Mint Director Nelly Tayloe Ross was a fan, so she asked her Chief Engraver to do a mock-up.

Unfortunately, Sinnock died before he finished, so his assistant, Gilroy Roberts, completed the job. But his initials, JRS for John Ray Sinnock, were still put on the coin. But because of the panic over communism, a rumor began that the JRS was a secret tribute to Joseph Stalin. The same thing happened with his earlier coin, the Roosevelt Dime struck in 1946.

Also, just like his work on the Roosevelt Dime, Sinnock was accused of plagiarising his Liberty Bell sculpture from John Frederick Lewis. When the Commission of Fine Arts saw the prototype, they wanted the cracks removed from the Liberty Bell, feeling it would be taken as a joke. They also felt the eagle was too small, but they were ignored on both counts.

Curiously, Benjamin Franklin, like George Washington, didn’t believe in using portraits for coins. Too colonial. Also, he wasn’t a fan of eagles! He called them scavengers and often said a wild turkey should be America’s national bird. True story! Initially, the mint had wanted Franklin on the dime (around 1941), but that went to FDR, so he got the Half Dollar instead.

Apart from helping the US fund its birth, Benjamin Franklin had a big savings culture. He was a practical, prudent man (and a genius inventor), credited with the proverb ‘A Penny Saved is a Penny Earned.’ Apparently, what he said was, ‘A penny saved is two-pence, dear.’  So it makes sense that he’s on our largest coin and dollar bill denominations – 50c and $100.

Features of the 1951 Half Dollar

When you’re researching coin values as a newbie, you might bump into certain terms that you don’t understand. So we’ll start by defining a few. Coins are minted on blank discs called planchets. The heads side is known as the obverse and the tails side is called the reverse. The thin sides are the edges. Coins have various features including words, numbers, and images.

The words are called legends or mottos while the images are called devices. The background of the coin is called the field. The numbers show the year when the coin was minted. You may also see a mint mark, indicating the mint location, and initials to identify the designer. Mint engravers put theirs on the cut-off, but external artists often place theirs on the field.

The Obverse of the 1951 Half Dollar 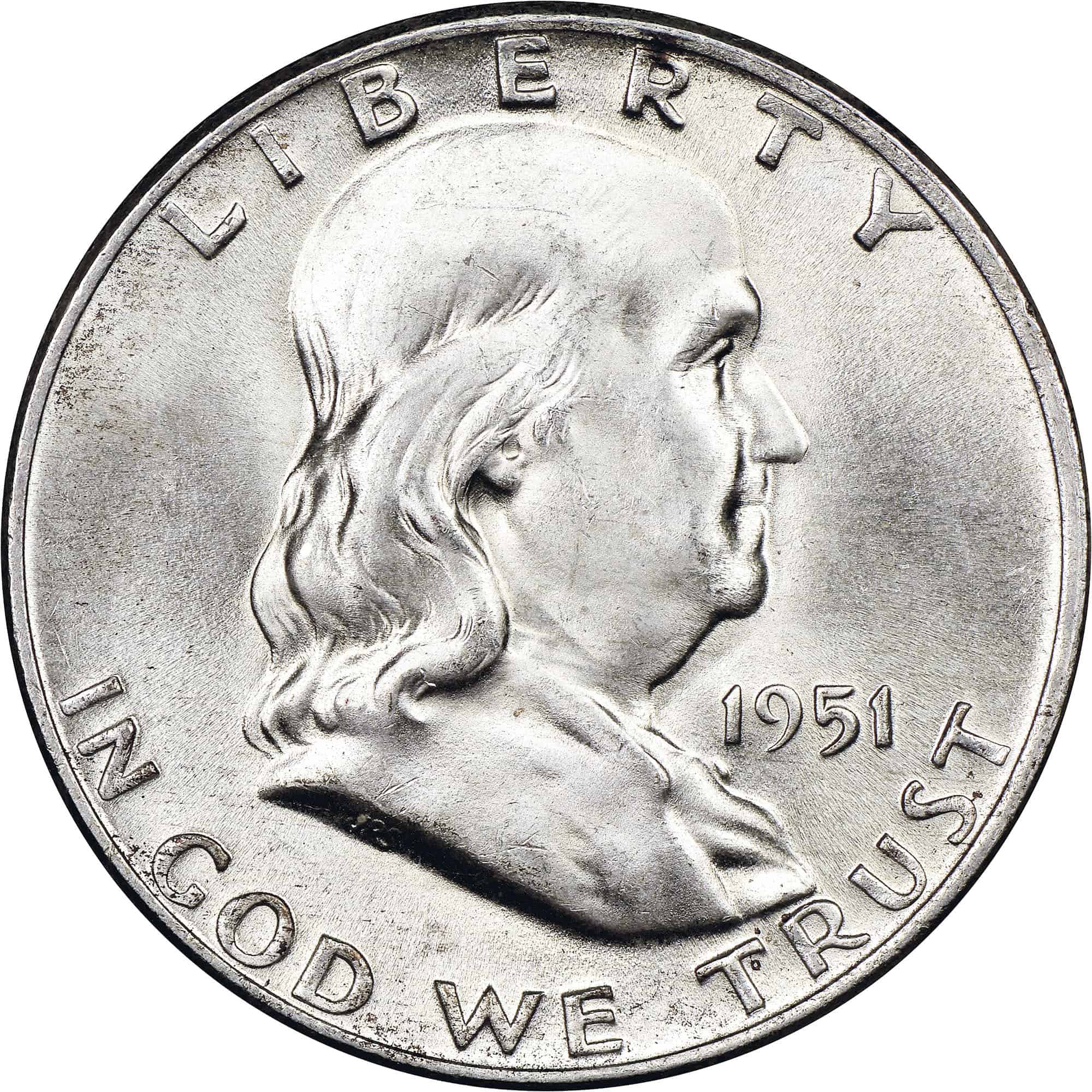 The obverse (heads side) of the 1951 Half Dollar features a portrait of Benjamin Franklin facing right. The designer’s initials, JRS, are on the shoulder cut-off towards the lower left side of the coin. Above Franklin’s head is the legend Liberty, and the motto In God We Trust runs along the lower rim of the coin. The mint date is on the right of the coin, under his chin.

The Reverse of the 1951 Half Dollar 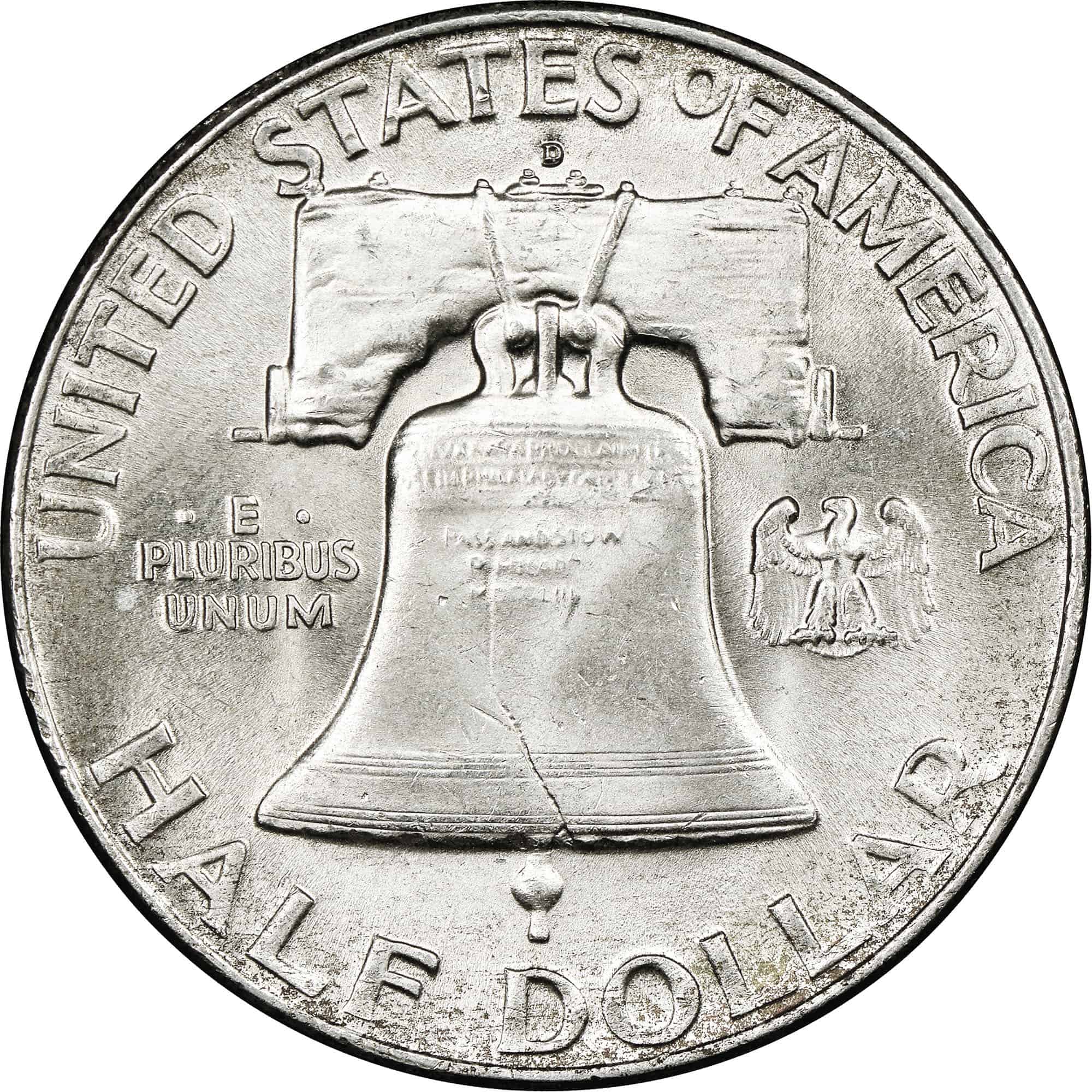 The reverse (tails side) of the 1951 Half Dollar features the Liberty Bell, with the tiny mint mark directly above it. The upper rim of the coin reads United States of America while the lower rim shows the denomination, Half Dollar. On the left of the coin, it says E Pluribus Unum, with a dot on either side of the E. And on the right side of the coin is a small eagle.

Other Features of the 1951 Half Dollar

That tiny eagle on the reverse of the Franklin Half Dollar seems oddly out of place. But it had to be snuck in because the law dictated that Half Dollar must have an eagle (somewhere) on the reverse. The 1951 Half Dollar was 30.61mm in diameter (1.21”) and 1.8mm thick – quite a large coin. It had a reeded edge and weighed 12.5g, containing 0.36 troy ounces of silver.

Before we get into the details of these coins, let’s talk about grading. The three best-known coin appraisers are NGC (Numismatic Guaranty Corporation), PCGS (Professional Coin Grading Service), and ANACS (American Numismatic Association Certification Service). They grade coins from 1 to 70, with 1 being Poor (P 1) and 70 being Mint State (MS 70).

They also grade proof coins as PR for PCGS and PF for NGC. Coins that look like proofs (but aren’t) might be graded as PL for Proof-Like or DPL for Deep-Proof-Like. And with Franklin Half Dollars, you might see the letters FBL on NGC-graded coins. This means Full Bell Lines, and it verifies coins that clearly show all the horizontal lines on the bell without any blurring.

We mentioned mint marks earlier, and the mint with the lowest volume often demands the highest resale prices. This is because fewer coins were made there, so the relative rarity raises the resale price of the coin. Let’s go mint by mint to confirm the volumes and rates. We’ll look at the highest recorded auction for each coin, as well as current price estimates. 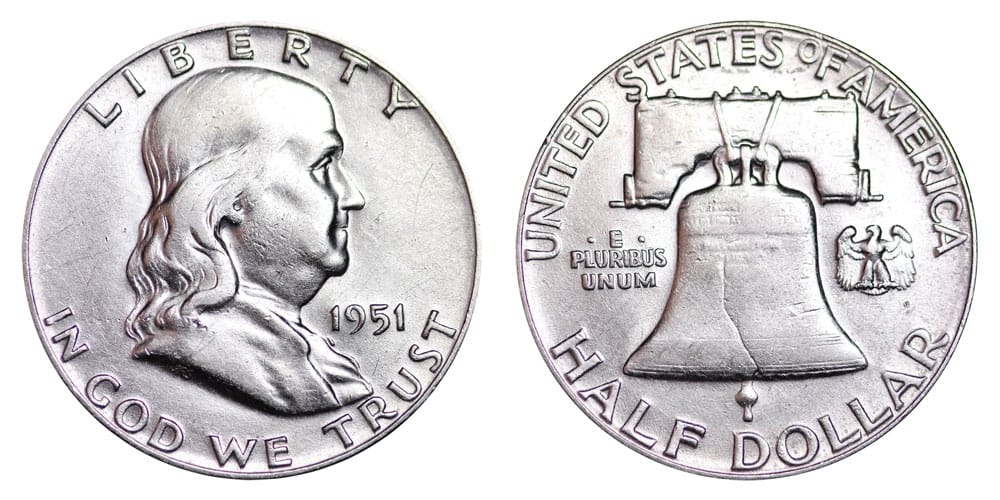 In 1951, the Philadelphia Mint made 16,859,602 Half Dollars, including about 50K proofs. None of them had mint marks, because apart from the War Years (1942 to 1945), coins from this mint didn’t have mint marks until 1979. How come? Well, it was the earliest US Mint, so we didn’t start using mint marks until the other branches opened and we needed identifiers. 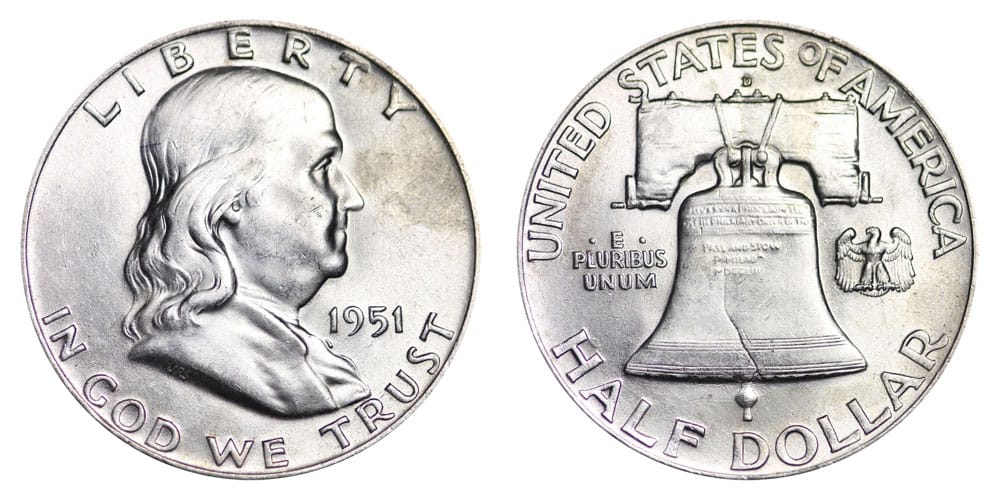 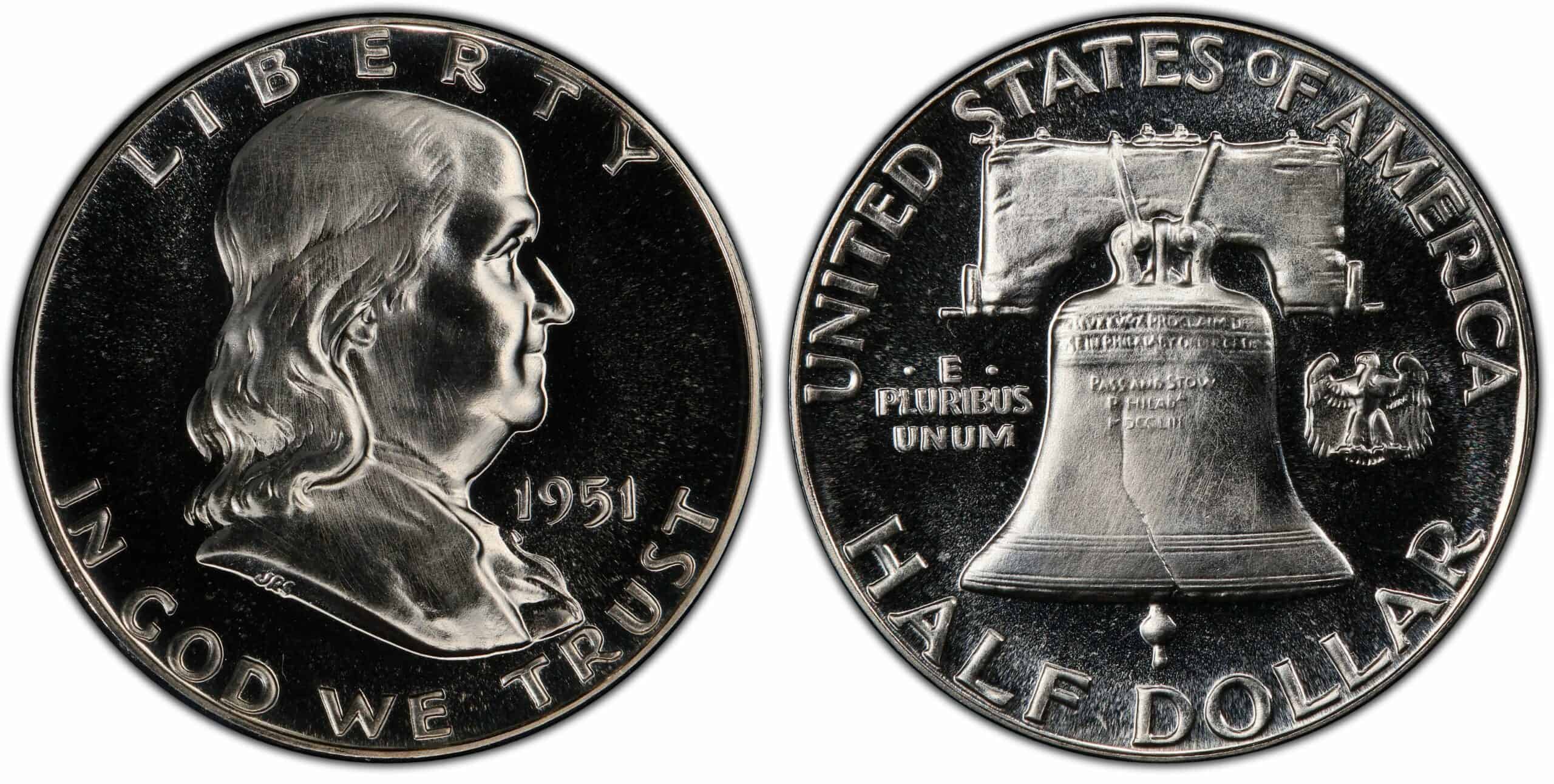 The purpose of proof coins was to verify the accuracy of the die and to keep a standardized copy for the archives. But these coins were later sold to collectors to earn extra revenue for the mint. These coins were made in a slightly different style than business strike coins aka regular strike coins intended for circulation. Early versions had a matte finish until 1917.

Then, starting 1936, proof coins were given a mirror-like polish by tumbling the planchet with stainless steel balls. After rinsing off any residue, the planchets were struck using proof dies that had a mirrored field and a frosted device, or vice versa. The reflective sections were scrubbed with horse hair brushes, while the frosted ones were either acid-pickled or lasered.

With acid-frosted coins, the haze would wear off with every strike, so the first 50 to 100 had an extreme contrast and were graded as Deep Cameo (by PCGS) or Ultra Cameo (by NGC). The next hundred or so were graded Cameo. After 1971, the mint used computerized lasers to do the frosting, so all coins had uniform levels of contrast between the device and the field.

An error can be far more valuable than a flawless one. And each minting mistake carries its own premium. But instead of just memorizing letters, numbers, and codes, it can be useful to understand how these errors occur. When a coin is being designed, the artist submits sketches for approval. The selected coin is made into prototype of plaster, rubber, and epoxy.

This goes into a reducing machine, then used to make a master hub, which makes a master die. The master die makes a working hub, which then makes several working dies. The dies then mint coins. Each of these stages involves multiple strikes, and if the metal moves at any stage, you can get doubling or tripling errors. Let’s look at some common ones worth money.

RPM means re-punched mint mark, and it’s a doubling error on the mint mark. Starting in 1990, mint marks were machined into place, but before that, they were hand-punched onto the working die. RPMs are written as S over S or S/S, and the second or third S appears in a slightly different spot. An MS 67 S/S sold for $1,920 in August 2022. The estimate is $2,450.

DDR means doubled-die reverse. It happens at the hubbing stage if the die moves between strikes so that the second impression is struck slightly to the right or left. This creates an overlapping effect that you can see most easily on the words and/or numbers. In 2010, a 1951-S Half Dollar DDR in MS 65 sold for $633 while in January 2007, it sold for $805.

To make a coin, the reverse and obverse die strike the coin simultaneously. But if there’s a delay in the feeder belt, the dies might mash each other without a planchet in between, and their designs may transfer onto each other. So the next planchet might get reverse die traces on the obverse or vice versa. An Obverse Die Clash in MS 65 was $800 in August 2022.

To keep proof coins pristine and undamaged, they don’t use automated feeders. Mint staff will carefully lift individual coins off the press using padded tweezers or cotton gloves. Even the burnished blanks are packed separately to avoid dings and scratches. They never touch! But doubling errors can still occur, and a 1951 (P) PR 66 DDR sold for $1,110 in March 2021.

The Bugs Bunny Error has a great name, and its description is even better. It’s a die clash error that left some of the reverse die imprints on the obverse die. So when you look at the Half Dollar under a jeweler’s loupe or coin microscope, Franklin appears to have buck teeth! An MS 64 sold for $538 in November 2010, but an MS 68 FBL was $235 in November 2020.

FAQs About the 1951 Half Dollar